DOK.fest München presents artistically valuable, socially relevant documentaries. In recent years, it has developed into one of the largest documentary film festivals in Europe and has been the largest festival of its kind in Germany since 2019. The international programme includes three main competition sections and fifteen awards (2,500 to 10,000 Euros).

In 2020, DOK.fest München @home, which was held purely digitally due to the location determined by Corona, was able to celebrate a new record with over 75,000 spectators throughout Germany. We hope to be able to welcome our audience back to the cinema in 2021, but given the unpredictable times, we must also consider an online edition.

We kindly invite filmmakers, production companies and distribution labels to submit their current documentary films for the DOK.fest München 2021. 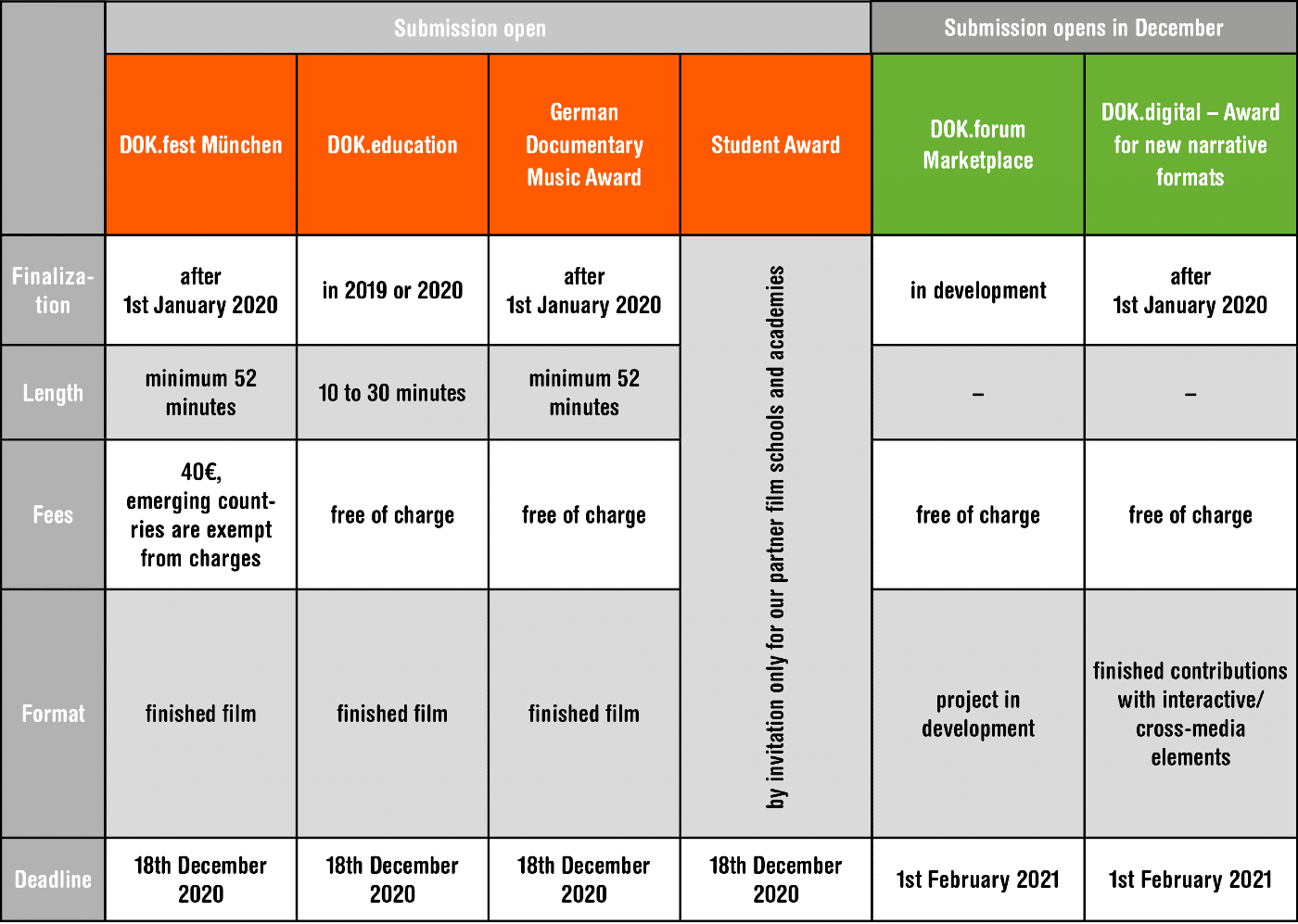 For the upcoming 36th DOK.fest München we are looking for outstanding documentary films with a minimum duration of 52 minutes, which have been completed after 1st January 2020 and have not been shown in German public television, nor may they have been on general release in cinemas in Germany. Furthermore, submitted films must not be freely available on internet platforms (Online festivals excluded). Premieres will be favoured.

The German Documentary Film Music Award honours film compositions that combine in a special way with the documentary narrative. Composers and filmmakers are cordially invited to submit their original compositions for a current long documentary film (produced in Germany). The film must not have been shown publicly at DOK.fest München.

For the school programme of our film literacy section DOK.education we are looking for documentary films (10 to 30 minutes) showing powerful stories for and about kids and adolescents (6 to 18 years), told in an artistic and creative way. The films may already have been aired or shown on other platforms. Submissions for DOK.education are free of charge.

For the submission to the Youth film competition please click here.

The Student Award presents outstanding documentary films by students of German-speaking film schools and academies. The films are nominated for the Megaherz Student Award, endowed with 3,000 Euros. Participation is by invitation, which we send to our partner universities.

SAVE THE DATE: Submission DOK.forum industry

The DOK.forum Marketplace is the ideas and co-production market of DOK.fest München. Every year, it offers around 40 selected projects a targeted matchmaking with partners from editorial, production, promotion and sales departments in roundtable sessions, one-to-one meetings and competitions with prizes. A special call for strong documentary projects at each stage of development will be made in December 2020.

This year, we are awarding the prize for cross-media and interactive narrative formats for the second time at DOK.forum Perspectives.

The prize is donated by the Bayerische Landeszentrale für neue Medien (BLM) and endowed with 2,500 euros. Young journalists, filmmakers, games designers and producers (up to 35 years of age) from German-speaking countries are invited to submit entries.