We are looking for stirring, moving, curious, impressive and relevant documentary films. From now on, filmmakers, producers, distributors and composers are invited to submit their latest films for the various programme sections of DOK.fest München.

After two successful online editions in 2020 and 2021, we have combined the best of both worlds into a dual festival experience for the 37th DOK.fest München 2022: Documentary films on the big screen in the cinema and at home on the digital screen. We would like to take up these inspiring impulses of the past years and retain the additional digital offerings. The next edition of DOK.fest München will also be held in a dual format.

All calls and regulations at a glance 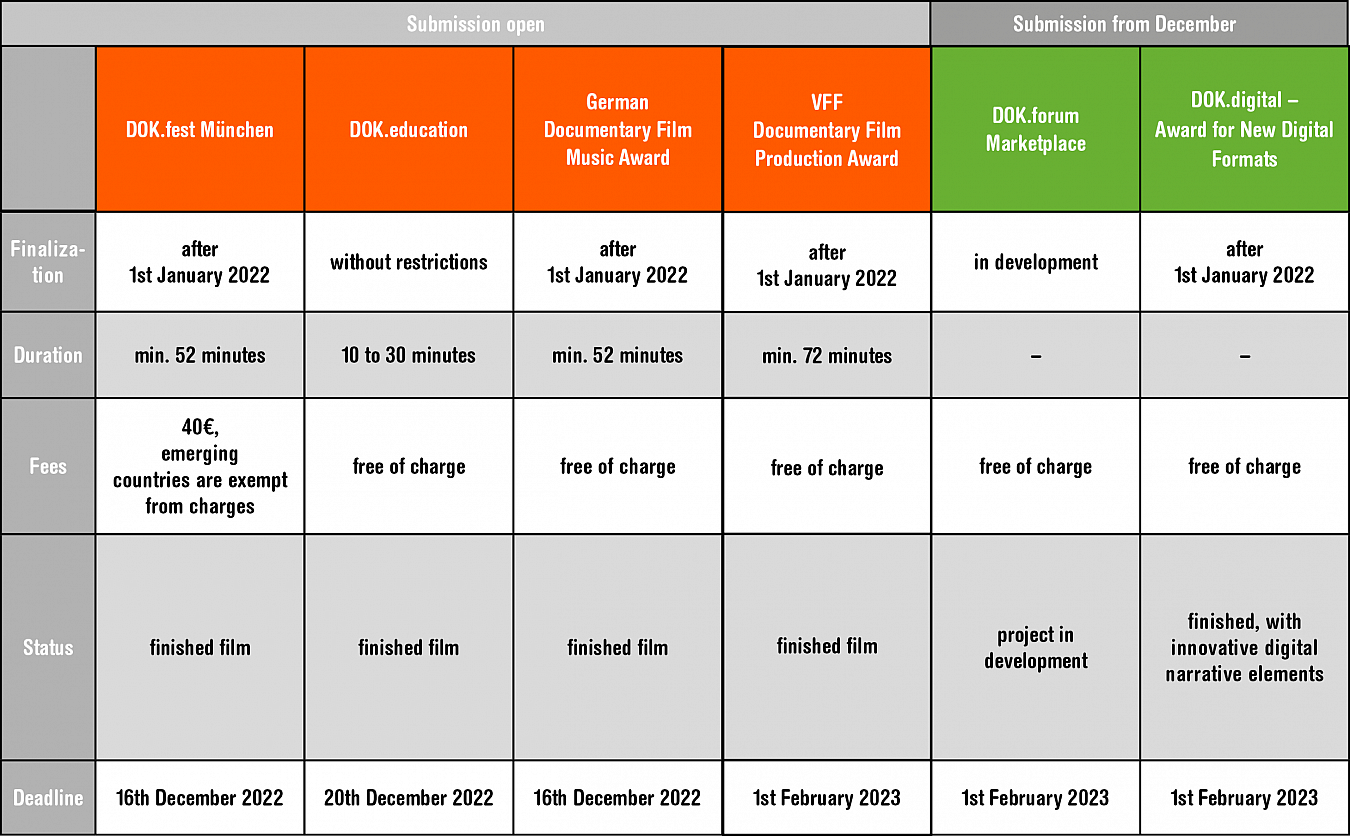 For the 38th DOK.fest München we are looking for outstanding national and international documentaries with a minimum length of 52 minutes which were completed after 1 January 2022 and have neither been shown regularly in cinemas in Germany, nor broadcast on German television, nor made freely available on any online platform (online presentation of festivals excepted). Preference will be given to premieres.

For the school programme of our film literacy section DOK.education we are looking for professional documentaries or films by professional filmmakers (10–30 minutes) that tell strong stories for and about children and young people (aged 6 to 19) in an artistic and creative way. The films may already have been broadcast and shown on other platforms. Submission for DOK.education is free of charge.

Click here for the announcement of the documentary film competition for young people.

The German Documentary Film Music Award, endowed with 5,000 euros, honours film compositions that connect with the documentary narrative in a special way. Composers and filmmakers are invited to submit their original compositions for a current feature-length documentary film from the German-speaking countries. The award is sponsored by the Versicherungskammer Kulturstiftung.

Unique in Germany, the VFF Documentary Film Production Award honours the role of production in the creation of current cinema documentary film projects. It is endowed with 7,500 euros.

The Student Award presents outstanding documentary films by students from German-speaking film schools and academies. All students from our partner universities are invited to submit their films. The films selected for the competition are nominated for the megaherz Student Award, endowed with 3,000 euros. In addition to classic formats, the Student Award is also looking forward to submissions of innovative, experimental and hybrid formats of any length. There is no submission fee for students (full waiver).

The DOK.forum Marketplace, the market of co-creation and co-production of DOK.fest München, offers around 45 selected projects a targeted matchmaking with partners from editing, production, funding and distribution in various pitching opportunities, roundtable sessions and one-to-one meetings every year. In addition, three endowed awards will be presented: the DOK.archive Award by British Pathé Archive, the DOK.composition Award by Sonoton Music and the DOK.talent Award of Haus des Dokumentarfilms. From December 2022, filmmakers are invited to submit their current projects.

Submission opens in December 2022.
FAQ for the DOK.forum Marketplace

Students from our partner universities are invited to submit their current projects for the DOK.talent Award 2023: The pitch competition offers them the opportunity to present their current projects to editors, producers and distributors in a speed pitch as part of the DOK.forum Marketplace. The best student project, including the most convincing pitch, receives the award, which is donated by the Haus des Dokumentarfilms Stuttgart and endowed with 2,500 euros.

In order to strengthen the artistic collaboration between filmmakers and composers, the best musical concept for a documentary film will be endowed with 2,500 euros. Sponsored by Sonoton Music.

As part of DOK.forum Perspectives, we award the prize for digital storytelling. The prize is sponsored by the Bavarian Regulatory Authority for Commercial Broadcasting (BLM) and is endowed with 2,500 euros. Young journalists, filmmakers, game designers and producers from German-speaking countries are invited to submit entries.

Submission opens in December 2022.
FAQ for the DOK.digital – Award for New Narrative Formats

Find out here about the competition series and awards of the 38th Munich International Documentary Film Festival.