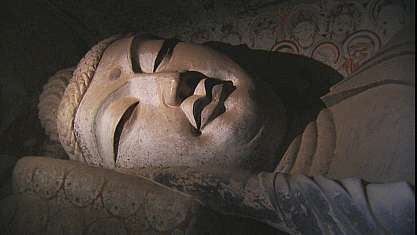 For more than 1,500 years two giant buddhas carved from a cliff face stood in the Bamiyan Valley of Afghanistan, a testament to the high culture that once blossomed along the Silk Road until the 13th Century. That is until March 2001 when, just six months before the destruction of the Twin Towers in New York, the two buddhas were blown up by the Taliban in a defiant act which provoked outrage around the world.

Oscar nominated director Christian Frei uses the destruction of the ancient stone colossi as a starting point for his cinematic essay, which reflects on notions of culture, identity and religion and explores the boundaries between the ancient and the modern, the global and the local. Frei weaves together several narrative threads, in a journey through time. We follow in the footsteps of the Chinese Monk, Xuanzang, who wrote evocative descriptions of the Bamiyan Buddhas in his diaries while travelling the Silk Road. Later we are transported to a high-tech lab in Zurich in the present day where scientists are trying to come up with strategies to reconstruct the statues. This is a monumental film which reminds us that, as Buddha once said, "All things change; nothing is permanent."

"The Giant Buddhas is not a film about terror, rather a film about transience, a film about the loss of cultural identity, about the search for truth, beauty and diversity. I was simply interested in looking back on an event that shook the world and decided to embark on a film journey. A journey along a multi-facetted line that both connects and divides people and cultures." Christian Frei

"The filmmaker has taken a recent hot, politically sensitive and highly symbolic news event and given us a thoughtful, well researched and beautifully filmed analysis of the complexities of the issue and cultural perspectives that stand behind the surface of the TV news. The Silver Dove is unanimously awarded to The Giant Buddhas." International Leipzig Festival for Documentary and Animated Film