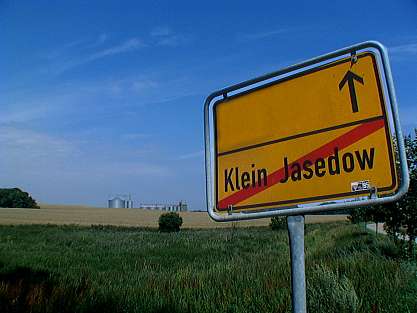 Go East! After the fall of the Iron Curtain, the eastern corner of Germany slowly but surely was emptied out. While more and more people emigrated to the West, life in the North-East was growing extinct.

In 1997 Klein Jasedow far off in the North-East of Germany is a place of dissolution. Set to be erased off the map. Total annihilation is imminent.

Abandoned land, ghost towns – put in the perspective of a couple of Western escapists – the potential for a new beginning.

A group of 16 people takes notice of Klein Jasedow, a few shacks are purchased, the village repopulated. The neighbourhood begins to blossoms: projects emerge from nothing, new employment is created. The newcomers plant eco-friendly gardens, set up a workshop for instruments and open a private publishing house. Klein Jasedow is the only community in Vorpommern that is growing instead of shrinking.

But success is deceptive; the claims have already been staked: the agricultural mega industry has a firm grip on the land and wants to keep it.

Am Arsch der Welt is a documentary Western in the German East.