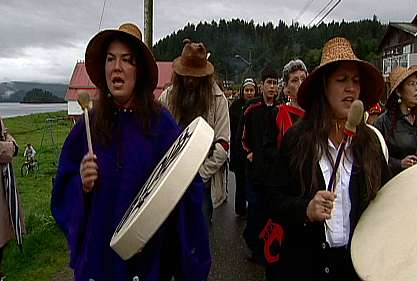 "What most amazed me was the perspective these people had on their ancestors—since I come from a culture, which has so little cultural memory. It was incredible to me that these people would devote all of their free time to honouring people who had probably been dead for two centuries and whose remains had disappeared 100 years earlier." (Kevin McMahon)

The legendary First Nation tribe living in the remote islands of Haida Gwaii ("Islands of the People") in British Columbia, Canada is fighting to revive its cultural heritage and preserve its identity. When remains of the tribe's ancestors were discovered in the basement of a museum fifteen years ago, they formed the Haida Repatriation Committee (HRC), and achieved the return of 160 bodies from the Chicago Field Museum that had been stolen a century ago during scientific expeditions which officially aimed to study this race that was expected to become extinct.

Toronto-based director Kevin McMahon lets the eloquent Haida people tell their story. When the Repatriation Committee enters the basement of the museum to view the ancestral remains, the poignant images of the Haida overwhelmed with tears speak for themselves. It took McMahon a whole year of dialogue to gain the community's trust and be allowed to film the process of the Haida healing their culture, and their ultimate reconciliation with the descendents of the scientists who had violated their graves.Stolen Spirits of Haida Gwaii has received wide acclaim within the Haida Nation.

"[Director Kevin McMahon] has a full understanding of what it's all about. Not just repatriation but the potlatch procedures of the Haida Nation; and that comes through in his video." (Andy Wilson, HRC member)

"When your body no longer functions and you're gone, your spirit or essence takes at least a year to get to the other side. So to disturb that final place, you can really mess up that poor spirit." (Nika Collison, HRC member)

"[…] In North America, these [aboriginal] peoples and their cultures have been subjected to some of the worst violence, subjugation, humiliation and, finally, dismissal that Western culture has handed out. And yet, they have not been crushed and, in fact, are resurging all over the continent. Extraordinarily, most aboriginal peoples, and certainly the Haida, have answered every indignity by turning the other cheek and remaining very generous toward people from the dominant culture. They believe, and the Haida showed this in many ways in their repatriation, that 'as we heal the Earth will heal'." (Kevin McMahon)