BEFORE THE FLOOD (YAN MO) 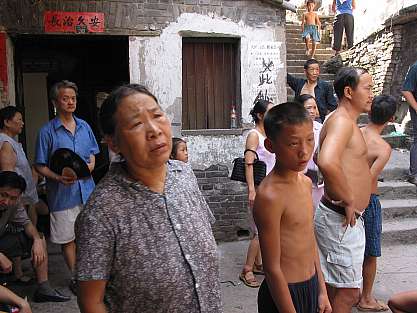 Fen-jie on the Yang-Tze River looks back on a 2,300 year old history that will soon be lost to the floods. Fen-jie is one of hundreds of towns that are silent victims of the largest dam construction project in the world: the Three Gorges Dam in China. Before its completion in 2009, millions of local residents are expected to be relocated, as their towns and land will be under water. Many of these places which are about to disappear are natural monuments and historical sites, like Fen-jie, the "town of poetry", home to China's most famous poet Li Bai.

But we can sense nothing of the well-known beauty and poetic atmosphere of the place. "From now on, we are enemies of all poetry!" the two filmmakers claimed after they had finished this sober portrayal of the step by step destruction of an entire town. At first, poverty and unemployment flourish then social justice and civil rights disappear. It's the law of the strongest. When the houses are demolished, people who cannot afford a new home, the old, the deceased and the poor, remain amidst the ruins with no water and electricity. The tears of a war veteran, priests loosing their faith... Before the flood, there is no more human dignity.

"Before we went there, many of our friends suggested that our film would capture the beauty and sentiment of Fengjie, 'the town of poetry'. Some of the most-recited poems in Chinese history were written there, the Three Gorges themselves are a poem of nature, and the locals create poems every day. [...] But once we were there, it appeared impossible to respond with poetry to the tears of a war veteran, or to portray the daily lives of a group of porters who live in squalor, like dogs." (Li Yifan & Yan Yu)