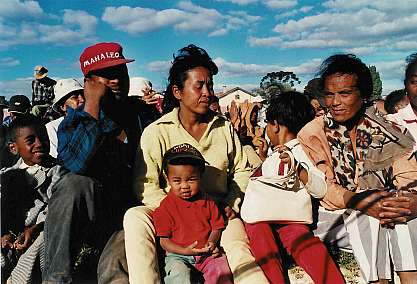 In Malagasy "Mahaleo" means "free", "independent" and "autonomous". The revolutionary songs of the group Mahaleo were the catalyst of the 1972 uprising that led to the fall of the neo-colonial regime and military dictatorship in Madagascar. For more than thirty years, these songs have accompanied the Malagasy people and shaped their consciousness. Despite their immense success at home as well as throughout Europe, the seven musicians of the group have always refused the trappings of show-business. They have instead chosen to engage in the development of their country. Among these forerunners of the Malagasy blues are a surgeon, a physician, a farmer, and a sociologist.

Led by the power and emotional intensity of the songs, this roving film is a documentary portrait as well as an ode to Madagascar, its landscapes and its people. There is no voice-over or commentary by the directors. The songs' poetry, their rhythm and subversive words tell the story of the country, reflecting the Malagasy tradition of "the heritage of the ears", the oral transmission from generation to generation. Even today, young Malagasy go out on the streets and start singing the revolutionary choruses to taunt the military or to protest when, once again, a president is trying to usurp too much power.

"In the US, they would be stars; here they are doctors, development officers or… deputies."
(Fred Hildago, "Chorus - Les cahiers de la chanson" n°20, 1997)

"I am from the same generation as the Mahaleo musicians. Like all Malagasy teenagers of my age, I was brought up on their songs […] Any time our lives were at turning points, their words and melodies were on our lips." (Raymond Rajaonarivelo)

"The Mahaleo reveal Malagasy identity to us. Malagasy people of all ages sing the lyrics; they appropriate their words. On their lips, they seem just right - they are the ones to question the politicians or militaries, to tell the life of delinquents, to bear on their chest the 'scratches of love' or to recount the pains of delivery… They allow us to have a different perspective on Madagascar." (Cesar Paes)