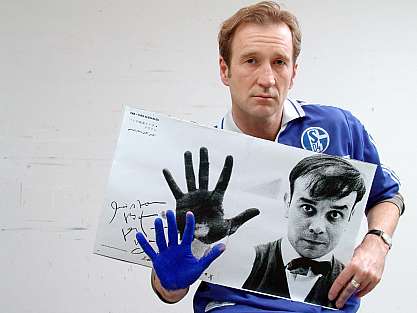 What links art and soccer, Yves Klein and a German soccer team? We are in Gelsenkirchen in 1958. The famous German soccer team Schalke 04 wins the German Championship while the French artist Yves Klein, later known as "Yves le monochrome", is invited to design the foyer of the new theatre. The sensational result: 500 square meters of radiant blue. And because blue is also the colour of Schalke 04, the actor and Schalke fan Peter Lohmeyer sets out to find a connection between colossal sponge relieves and the German Champions' Cup; between Klein's ultramarine (the International Klein Blue), and the team's royal blue; international avant-garde and the German economic miracle. We meet many artists like Yves' wife Rotraut Klein-Moquay, Günter Uecker and Heinz Mack, co-founders of the Zero movement, the architect Werner Ruhnau or visionaries like the astronaut Charles Wilp who became world famous with his photos for Afri-Cola, and not to forget the soccer players of the 1958 winning team. They talk about art, soccer, the fifties and weightlessness...

"The destroyed city didn't have much, but we felt the urge to build a new paradise, a new world right now." Werner Ruhnau, Architekt

"It has become a very nice Blue; although it is not royal blue like Schalke's." Rudi Assauer, manager of Schalke 04