THE OTHER SIDE OF BURKA (AZ PASE BORGHE) 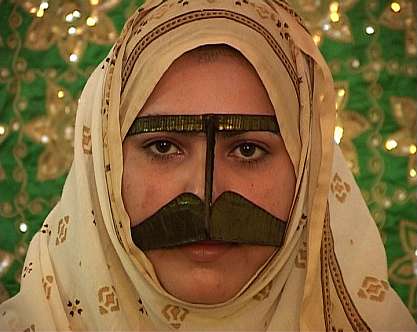 On the southern Iranian island of Qeshm married women are hidden until their death behind a "burka", a leather mask of black bands, which presses against the eyebrows and nose, and ends in a point just above the mouth. In interviews women confide in Mehrad Oksouei through the camera. They talk surprisingly openly about their mental and physical conditions although this means contravening strict religious rules. "We never wanted to appear in front of a camera, but now we do. We may wear burkas, but we are human beings. We breathe and live."

During the ritual ceremony of the "Zaar" (literally possession), a dance is performed to liberate the women from so-called bad spirits. More and more women find their only escape from their misery and oppression is suicide. The film opens with the funeral of Samireh, who hanged herself from a fan with her shawl. Her husband's only concern is: "A woman is like a pair of shoes. When one is gone, you can find another one. But what am I supposed to do with the children?" Other women have chosen to endure their dreadful lives out of love for their children. Mehrad Oksouei gives these plagued women their beauty and dignity back.