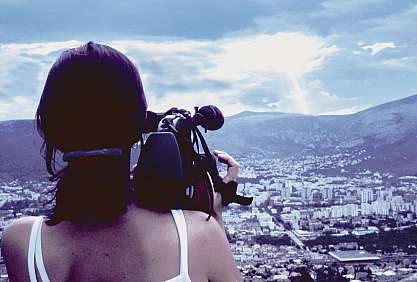 During the Bosnian war, the city of Mostar was a centre of battle twice. Today the city is populated almost exclusively by Croats and Bosnians. One group lives in the Christian west of the city, the other has made the Muslim eastern part its quarters. While Mostar is officially one municipality, the barricades pervade all of public life: there are two city halls, two courts and two universities. Only the prison is shared by both ethnic groups.

Director Silvia Vila is of Croatian origin but grew up in Germany. In order to find out what it is like to live in this divided city, she decides to travel to Mostar.

Most inhabitants have internalized the division. The near past has scarred the city. It influences the present to such an extent that no one is willing to question the situation. Many people are too caught up in the daily fight for survival, to be thinking about weighty matters of principle.

The more time Vila spends in Mostar the more absurd the situation appears to her. After all, coffee is prepared the same way all over the city. Except in one half they call it Bosnian, in the other it's Croatian.

Welcome to the Boarder reveals different inhabitants' views of the city, overlapping with the director’s reflections and emotions.