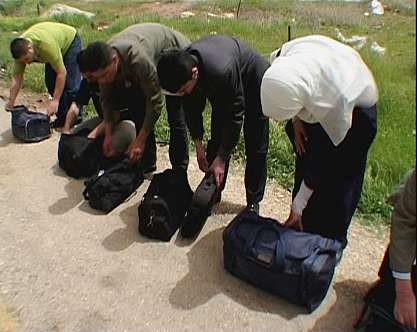 The West Bank and the Gaza Strip have been occupied by the Israeli military since 1967. Thousands of Palestinians and Israelis are forced to cross one of the over 200 roadblocks throughout Palestinian territory.

Director Yoav Shamir spent two years filming at different checkpoints. We see Israeli soldiers guarding the crossings. Heavily armed and in permanent fear of a suicide attack, they hold a position of great power over the Palestinians. Some of them are very young and find it hard to adapt to their new roles as commanders. But others take seeming pleasure in humiliating these people: making them wait for hours in the pouring rain, scaring them with their guns.

On the other side are the Palestinians, trying to get to work or see a doctor. Every day they encounter frustration and arbitrary cruelty. We see them arguing with the guards, pleading for passage. The tenseness is palpable, when group simply ignores orders and crosses the checkpoint without permission.

Checkpoint is an unconventional and honest look at reality on both sides of the border.

All winners and awards since 1989