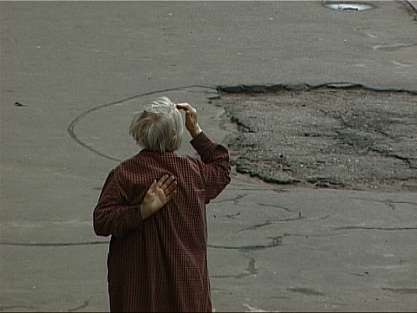 From his apartment window in St. Petersburg, filmmaker Victor Kossakowsky has made a documentary, which he himself describes as a comedy. During one year of endless repairs for the 300th anniversary of the city, he filmed a few square meters of a St. Petersburg street. We see a woman collecting snow in her coat pocket. Drunks and policemen, young lovers...

Kossakovsky was inspired by E.T.A. Hoffman's short story Des Vetters Eckfenster (My Cousin's Corner Window), which tells the story of a paralysed man whose sole contact to the outside world is the view from his window.

"We don't normally look at things that are right in front of us. In a way, this is an example of what can evolve in front of your eyes if you care to look. Some how this realistic story transforms realism into the surreal, into the abstract." Victor Kossakowsky

Alle Awards and Winners since 1989