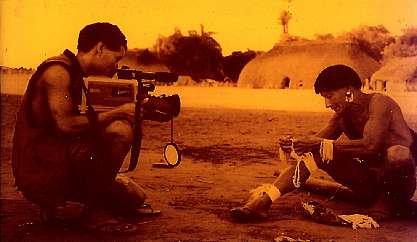 ''When I was a child, my grandfather told me the story of a noisy bird that changed our life forever,'' says Karané. Forty years ago, on the banks of the Rio Jatoba in the middle of the Brazilian Amazon, the Ikpeng Indians, a tribe of warriors, had their first meeting with white man. The Villas Bôas brothers, explorers and activists for indigenous rights, flew over in their "bird" and "excreted" a parcel of food. Orlando Villas Bôas was filming the encounter.

Fortune hunters followed the explorers, eager to exploit the land and women, and the tribe were persuaded to go to the Xingú reserve by boat for their own protection. It is clear that the Ikpeng, particularly the elders, still suffer the loss of their ancestral land and way of life. They tell us about the radical destruction of their culture and skilfully re-enact scenes and events that the white men could never get on their cameras. This story is thus unusually told from the tribe’s perspective with white man as the alien, imposing his customs and culture.