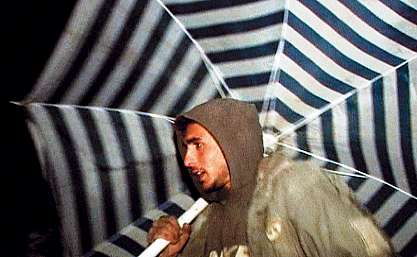 There are thousands of young men like Ahmed and Muhammad, the two spirited young Palestinians whose daily lives are documented in this touching intimate, yet political film. By day the men build luxury apartments for the Israeli middle classes, by night they live in huts in the hills on the outskirts, in constant fear of discovery by the Israeli authorities. For the many illegal Palestinian workers in Israel, who have undertaken arduous journeys just to find employment in the occupied territories, life is a struggle for survival.

Filmmaker Ido Haar has achieved a remarkable closeness with the young men at the heart of this documentary. He has clearly taken to time to get to know and to earn the trust of the pragmatic Ahmed and philosophical Muhammad. Through Haar's stark handheld images we share in the camaraderie and family spirit of a band of construction workers in their makeshift homes. Their passion for life is constantly challenged by the hardships and dangers that they endure, but still they continue to forge a life for themselves on the fringes of society.

"It has become clear to me that much in life has to do with luck, or in which country you are born." Ido Haar

"I made the film to give the Israelis a wake up call, to make them aware of what is happening, so that they don't allow themselves any longer to indulge the illusion that the separation wall makes any real difference to the situation or that our lives have suddenly become more peaceful." Ido Haar