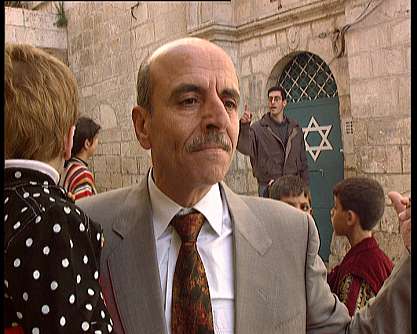 Over a period of nearly two decades, Nissim Mossek filmed two families living on Haladiya Street in Jerusalem’s Old City, a tense street full of antagonisms and prejudices, where Arabs and Jews live next door to each other. The family of Abu Bassem, long-term Moslem residents and the family of Danny Robbins, Jewish settlers from the USA, are neighbours. Their lives reflect the dreadful events that have occurred on this fateful street: assassinations, acts of revenge, targeted provocations. Abu Bassem only wants Arab and Jewish children to play together and to say good morning to one another. But that is a utopia on Haladiya Street. Is it possible for two men and their families to live together, given the street’s history and the background of conflict, murder, and hate? Since his first encounter with the protagonists in 1986, Mossek has been constantly returning and documenting the turbulent changes in the neighbourhood. "The material, which I filmed over the years, showing the density, the intimacies and complexities of life on the street, can also be seen as a microcosm of what is happening in the battle for the soul of Jerusalem." Nissim Mossek

"Even if I were to study the history of Jerusalem with Professor Meshulam or with one of the followers of Baruch Marzel, I would learn much more from watching the expressive faces of Danny Robbins or Abu Bassem, the heroes of the film Shalom Abu Bassem." Yoav Har Oz, Walla News

Further films, discussions, panels at Israelwoche, 2. to 14. May