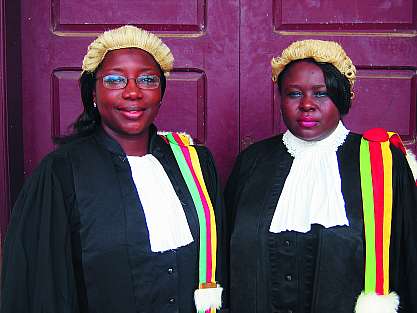 In a courtroom in Kumba, a small town in Southwest Cameroon, two women fight for justice on a daily basis. State Prosecutor Vera Ngassa and Judge Beatrice Ntuba tackle domestic cases of child abuse, rape and divorce with wit and compassion, wielding the power of the law in defence of the rights of women in their community.

Six year old Manka bears horrific scars from repeated beatings from her aunt. Amina is bravely seeking a divorce from her violent husband, risking scorn from the members of her Muslim community. A victory in this case would mark the first successful prosecution for spousal abuse in 17 years in Cameroon. Finally, in another moving courtroom drama, we are introduced to adolescent Sonita who has been raped by her neighbour. These three interwoven stories reveal the spirit of hope and courage that emerges from the indefatigable work of two women.

Sisters in Law is a sympathetic but unobtrusive portrait of two African women who are affecting change within their culture. The film defies stereotypes of both women and the third world.

"I don't like traditions that oppress people and I'm attracted to stories about people standing up for themselves against authority and tradition." Kim Longinotto

In Sisters in Law the Wheels of Justice Grind Fine

„The women of Kumba Town take no guff, thanks to the clear minds, bright spirits and rock-steady ethics of the ‚Sisters in Law’, Vera Ngassa (a prosecutor) and Beatrice Ntuba (a judge). Warmly assembled by Kim Longinotto and Florence Ayisi, this winning documentary follows them as they nourish grass-roots feminism in a Cameroon village.

Men stupid, cruel or negligent enough to wind up in the courthouse swiftly find their idiot assumptions exposed in the light of constitutional justice: sorry, guy, your wife doesn't have to ask permission to leave the house. Patriarchal arrogance is knocked clean off their hapless mugs as the world's worst alibis crumble before the sisterly smackdown.

The cases are appalling. A pre-pubescent girl is raped and left bleeding. A 6-year-old is beaten with a coat hanger, her body scarred with welts. The wife of a callous, vengeful jerk seeks help divorcing him. Nevertheless, the movie doesn't depress. When the right thing is done, it is uplifting in any context. Sisters in Law positively soars.

The movie plays like a cross between Ousmane Sembene's vibrant parable ‚Moolade’ and Raymond Depardon's gripping procedural ‚The 10th District Court’. It's looser than both, and would benefit from some cultural and political background. Committed, in strict vérité, to the here and now, Sisters in Law eschews the when and how. I'd happily watch a biographical prequel to this particular slice of life. Who are these women, and can they please take over the world soon?“ Nathan Lee, New York Times, April 12, 2006